In 1981, Wyoming experienced its first gold rush in the 20th century after I released a report on gold assays from samples I collected at Bradley Peak in the Seminoe Mountains (some vein samples ran as high as 2.87 opt Au, and one altered banded iron formation sample assayed 1.14 opt Au). Companies, prospectors, consulting geologists all wanted to further investigate this area. Me too!
After the announcement, all of the motel rooms in Rawlins, Wyoming were booked solid by exploration geologists. Not easy to do, because few people like to spend time in Rawlins - its ugly, hot, dry and the State constructed the State Pen in Rawlins. We think of it as being a not so pleasant place where rattlesnakes are common. Today, it has a new golf course along the interstate that looks like a clone of Arizona's Apache Junction course in the cactus and sagebrush.

After finding gold at Bradley Peak in the Seminoes, a few years later I met a new friend - Dr. Terry Klein of the USGS. Over the years, our paths periodically intersected. Terry completed a PhD dissertation in the area and first recognized komatiite volcanics associated with this greenstone belt, as well as a broad zone of propylitic alteration surrounding the area where I found the gold specimens. This altered zone needed to be drilled and still to this day, needs to be drilled. Wyoming has a lot of gold deposits, but for some reason, the State ignores gold - even though Wyoming's geology suggests 100 to 500 times more gold should have been found in the Cowboy State. Where is all of that gold hiding?

This discovery of significant gold in the Seminoe Mountains was the first of a number of gold rushes I started while working at the Wyoming Geological Survey at the University of Wyoming. And I'm pretty convinced I would have found more economic gold deposits in Wyoming if I could have stayed a bit longer. But I couldn't stand the sight of the most corrupt person I ever met - the director of the Wyoming Geological Survey.

I had several interesting experiences in the Seminoe Mountains. It is a very quiet place with no one around for miles. So, I loved working in the middle of no where all by myself.

But on one day, I met two of the nicest  people anyone could imagine - Charlie and Donna Kortes. All kinds of features in this region are named after them, such as the Kortes Dam. Anyway, they wanted me to look for mineralization in the Sunday Morning Prospect.
This was a mine not too far from the mines on Bradley Peak. After one crawls in the first few feet, the tunnel looks as if it is offset by a fault (which it isn't). The tunnel just drops about 6 feet for no apparent reason. So to get access the rest of the tunnel, one needed a ladder.

Well, Charlie and Donna brought in two, small, aluminum ladders and wired them together with chicken wire. As I climbed down the rickety ladder, Charlie announce he and Donna would sit outside the mine portal and wait for me. E-gads! Are these two (who I had just met) going to sucker me into climbing into the mine and then pull the ladder out, steal my government 4-wheel drive truck with 200,000 miles, and leave me there to die? Oh, well, I thought, so I worked my way to the mine face. After a few hours,  I worked my way back to the ladders, and - whew - still there. I climbed out of the portal and told them there was nothing much to see in the mine.

Another day, Charlie and Donna talked me into looking at their gold deposit located about a mile from the Miracle Mile on the North Platte River. The area of interest was dry, and part of a Tertiary to Recent unconsolidated conglomerate. They told me to dig some dirt and pan it for gold! I dug some dirt and took it to the North Platte were I panned the material - "well I'll be a Wyoming Geological Survey's uncle", I thought to myself. Gold! Everywhere I sampled in this dry placer, I found gold. And with the gold - many samples had distinctly purple to lavender pyrope garnets - the same kind typically found associated with diamond-bearing kimberlites!

Over the years I panned numerous pyrope garnets from this paleoplacer. Every single pyrope garnet we tested with the electron microprobe at the University of Wyoming had diamond-stability geochemistry! That had never happened to us before. Of all of the pyrope garnets I sampled elsewhere in the past, only a small percentage had diamond-stability geochemistry.
This data suggests there is one heck of a diamond deposit(s) hidden out there waiting to be discovered as well as some placer diamonds waiting to be found - and based on the geochemistry of the garnets - it will be rich (and there are likely many diamonds to be found in the region in the paleoplacer and in the North Platte River). In order to have those kinds of garnets scattered in the paleoplacer indicates that the host diamond-bearing kimberlite pipe has been partially eroded  and some diamonds from that hidden pipe should be scattered in the conglomerate on the north flank of the Seminoe Mountains.

I could never get the director to request money from the legislature  to search for the source of the gold and garnets. But what the heck, directors often have much better things to do - such as harassing his geologists to death, and hiring communist Chinese into this department.

Another interesting experience happened when I was working near Sunday Morning Creek on the North Flank of the Seminoe Mountains. It was very late in the day and time to get off the mountain. I was tired from walking all day and it was hot. My mind said to me - "watch for rattlesnakes" and just about that time, I stepped on a coiled rattlesnake! Have you ever seen a geologist in heavy hiking boots, a backpack full or rocks and heavy utility belt break the world's record in the high jump and long jump combined? Well I did! Years later, when I mapped the Iron Mountain kimberlite district in the Laramie Mountains, I tried to break the record again. 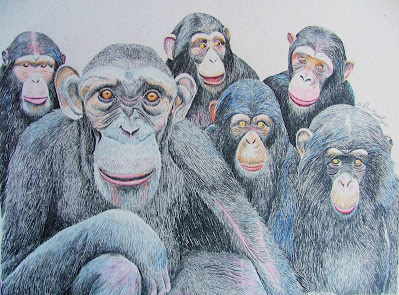 Well, I'll be a monkey's uncle, group of Wyoming democrats
including the Director of the Wyoming Geological Survey
and governor (2006). 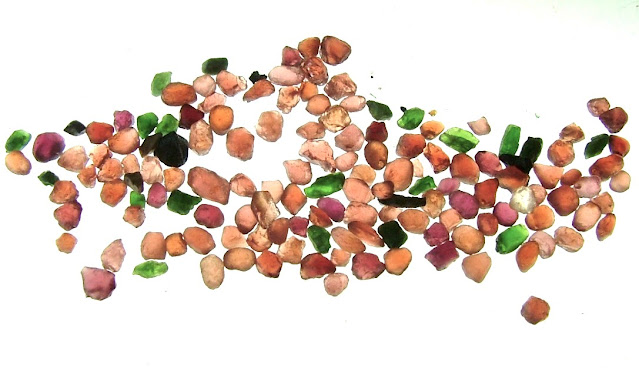 Diamond indicator minerals from Butcherknife Draw area, southwestern Wyoming. Although
these are not from the Miracle Mile area, they are similar and include some distinct
purple garnets (pyrope) that are derived from the diamond stability field, some reddish to brownish
almandine garnets, some orange spessartine garnets, and emerald-green chromian diopside.
Posted by The Gem Hunter at 10:22 AM